Pennywise, a terrifying clown featured in Stephen King’s IT, earns the top spot this year—but other popular characters from television series like Stranger Things are close behind. 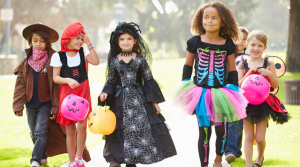 If Halloween fans can expect anything while trick-or-treating later this month, it’s that they may bump into a real-life version of their favorite superhero or TV character. According to a new trend report from Google, the top trending Halloween costumes this year stem from some of 2019’s most exciting films—including IT: Chapter Two, the second entry in a film series inspired by Stephen King’s terrifying tale about a murderous clown. While you may see plenty of clowns out and about this All Hallow’s Eve, there are more friendly heroes you should expect to see: Spider-Man (who has appeared in Avengers: Endgame and two other Spider-Man films this year) is the third most-popular costume idea for kids and adults alike.

If you prefer Netflix to the big screen, you’ll be happy to hear that many characters from the streaming platform’s runaway-hit Stranger Things is also among the top 10 Halloween costumes ideas this year. Search queries for the “Scoops Ahoy” look worn by two characters in the series, Steve and Robin, are rapidly rising. Costume ideas for the Demogorgon monster are also on the rise—there has been a 300-percent search increase this year alone. If you’re looking for a more sinister look but aren’t a fan of Pennywise, the Google report says that the DC Comics’ character Harley Quinn (made popular by the film Suicide Squad in 2016) is still among the most popular Halloween costumes yet again.

But not all of the most popular Halloween costumes come from spooky films and television shows. If you prefer your Halloween costumes to be on the funnier side, take a cue from food trends, as thousands of people have been searching for ideas related to hard seltzer. Queries for “White Claw costumes,” a popular alcoholic seltzer brand that has birthed the overall love for the drink this year, have risen by a whopping 1,450 percent over the last few months.

If you’re searching for a costume idea that could work for you and your best friend, Disney ideas abound. The most popular couple’s costume stems from the 2002 film Lilo and Stitch, closely followed by Bonnie and Clyde as well as Cosmo and Wanda from the Nickelodeon show Fairly OddParents. And if you’re still hunting for Halloween group costume ideas that could work for the entire family, Disney’s Descendants ranked as the top trending search term—but there are plenty of family-friendly options that could be well received by your Halloween guests. Toy Story and Monsters Inc. rounds out the most popular costume ideas for families, followed by a triage of characters from iconic ’90s cartoon series The Powerpuff Girls.